Archive for the tag “Tree”

Under the Bois ‘D Arc Tree 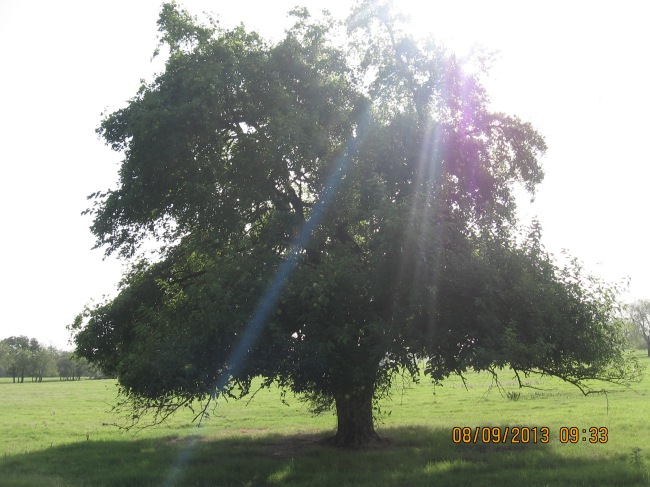 I cannot believe I haven’t posted anything since May. Time really has a way of disappearing quickly. Of course, when a person reaches my age, it disappears much more rapidly than for the youngster awaiting his/her 16th birthday and the coveted driver’s license. The times are certainly different from when I was a teenager.

I notice, too, that the summers seem to get longer and hotter, at least here in North Texas. In the pasture across the road from my house, nothing seems to be growing but weeds. I know the rancher takes care of his pasture, treats it for weed control, grasshoppers, etc., however, not much changes from day to day. The grasses wither and the bugs continue to fly/hop. I am beginning to wonder about this “global-warming” thing.

There is one lone tree directly across from my front door. It seems to thrive in this heat and lack of rain. It is a horse apple tree, also known as a Bois ‘D Arc tree. Still another alias is an “Osage Orange” tree. This name comes from the Osage Indians who used the tree to make their bows. The fruit, if you can call it that, is a round green sphere with nubs, about the size of a grapefruit, or large apple. It isn’t good for much, inedible, even the livestock avoid the green globes. Horses have been known to consume these but have also died from lodging in their throat. Some folks have used it to prevent cockroaches, fleas and spiders. I have not tested it for the specific usage they claim, although I want to try it in the dog kennels. Who knows, maybe I cannot get a leg up on the fleas. I heard that Martha Stewart used them in decoration, once. I did not see the episode. Rather sorry I missed it.
The most obvious benefit I see is the livestock use the tree for shade. I suppose cattle are not as dumb as one would think. Anyway, I think this poem might sum it up. Maybe you think so, maybe not. Have a safe and cool day.

Under the Bois ‘D Arc Tree

The fields yonder way are
rapidly becoming a crusty brown.
Summer had arrived with a passion,
thrusting its way onto nature’s stage.
A surreptitious beginning,
now rising at a blistering pace
to an igneous desert atmosphere!

The stately Bois D’ Arc drops
its pale green orbs in acceleration,
as if attracted by a magnetic field.
They fall indiscriminately
to the withered ground below,
where they will quickly succumb
to Summer’s sultry heat.

An eager drove browses the field
Seeking forage on which to feed,
yet finding no crisp morsel of green.
Numerous cattle egrets follow
shamelessly in their tracks
feasting on countless grasshoppers
disturbed by the herd.

The cattle seek shelter beneath the tree
in the torrid noonday sun.
Yet their bodies generate a crescendo
Of warming proportions.
Stragglers stand knee-deep
in the middle of the pond
in a valiant effort of cooling down.

I see creatures of nature, adjusting,
Seeking respite from an unadulterated
zealous heat, a stifling oppressive heat,
Occasionally flicking a tail,
Swatting at those pesky ubiquitous flies
and I stand in the comfort of a cool inside,
Looking out the front window.