Archive for the tag “Standard Poodles”

Perhaps in an animal person’s lifetime, there comes a gentle creature that, seemingly is the most cherished of all. This is a story about our friend and cherished companion, Apollo. He came to be with Jennifer on July 29, 2006, and crossed the Rainbow Bridge, May 17, 2020. I was fortunate to become, shall we say, stepdad, in May 2009. And it was a delight for me. I have always, and I emphasize always, been a person who loved animals and especially dogs, any breed, any size, any color. Apollo was a black Standard Poodle who fit my criteria. I loved that dog. But there is one who loved him even more. She authored this poem in his honor. Thank you, Jennifer, for your heartfelt words to Apollo.

I watch you from my chair gently breathing
I peer ever so closely being certain you are peaceful
You lift your head, as if you sense my presence…
Your many years as my constant companion slipping away,
Ever so slowly.
Your need to hold on,
Not letting go, breaking my heart into pieces.
The name I gave you at birth worn so eloquently.
When you cross that Rainbow Bridge, dance as your name
Defines you:
“King Louie’s Dance of Apollo”
Forever loved
Forever in my heart.

Tribute to my long-time companion, my Standard Poodle, Who passed at age 14

DENALI AND THE RAINBOW BRIDGE

Once again, we are faced with a piece of our heart broken. “Denali, Snow on the Summit”, a wonderful male standard poodle, has passed on. He was approaching 8 ½ years. I remember when he came to us as a 3 month old puppy. Although he was never shown, from the beginning he knew how to strut like a champion. He was a brilliant dog, very playful, a bit shy around strangers until he warmed up to you, but he could steal your heart. He had a stuffed duck that we called his baby. When I fed him, I would say, “Nalli”, time to feed your baby. He would pick up the stuffed duck and place it in his food dish. I regret I never got a picture of that. He loved to play ball. We have in our yard a Jolly Ball, typically used by horses, and several of our dogs play with that, but Denali was the best at grabbing the attached rope and swinging it around his head. He would stand there with it in his mouth and dare you to come and get it.

Once, our little black Cairn terrier, Grendel, got out of his kennel while Denali enjoying his run outside. Being the alpha dog that he is, and thinks he is Super Dog, this ten pound canine attacked this fully grown 40 pound Denali. This is where my instinct failed me. I reached in to separate the two dogs. Denali, fully, believing that he was biting Grendel, defended himself and bit me on the hand. The water hose did the trick, however. I have a scar that I will always treasure for it will forever remind me of this beautiful dog.

When Denali was growing up, he never quite mastered the technique of hiking a hind leg to “mark” his territory. Thus he constantly had yellow front legs. He most times “missed “his target.He would be embarrassed if he knew I told on him. But he eventually grasped the gist of the routine procedure.

Twice this year we have seen beloved pets cross over the rainbow bridge. And now, Denali joins Munchie and Prada to play forever. I placed his “baby” beside his head. As I said before, I understand it, but I will never get used to it.

Go rest over the rainbow bridge, Denali, my Santa Dog

Patience is a Virtue

I copied this from Wikipedia. Certainly sounds exactly like me.

“Patience is the state of endurance under difficult circumstances, persevering in the face of provocation without acting on negative annoyance or anger. It is also used to refer to the character trait of being steadfast”.

I also copied this from Wikipedia. Not being repetitious, it  sounds exactly like me.

They, whoever “they” are, say that patience is a virtue. I accept that. However, it can also be a challenge. Take, for example” the “Rancherette” and the tail (pun intended) of the “hitchhiker”. I am approaching the ripe old age of, well; let’s just say the ripe old age. Until now, I was unaware that a fourteen week old puppy could unlock the front door of my pickup, jump into the front passenger seat, make herself comfortable, and upon arriving at my home, have the audacity to exclaim, “she brought me here against my will, I was dog-napped.”.  I know Airedales are very smart, but that is ridiculous. I have difficulty opening the door to my pickup.

However, I can almost hear the conversation that went on with the “hitchhiker” sitting in my passenger seat in my pickup truck.

The “Rancherette”— “what am I going to tell the “Rancher”?
Alfie— “You’ll think of something. Tell him I hitchhiked a ride.”
The “Rancherette”—“I’m not so sure he will believe that.”
Alfie–-“If he is as gullible you are, he will.”
The “Rancherette”-— “OK, I’ll give it a try,”
Alfie–– I’m pretty sure he’ll love me once he gets to know me”
The “Rancherette” —“But what if he don’t?”
Alfie— “I think it will be fine; I can handle the “Rancher”. He will be a pushover for my endearing eyes. All I have to do is Just blink twice, he’ll be hooked”. it worked on you didn’t it. Besides, I’ll be eating out of his pocket before you know it.”

These enduring eyes started the whole “Patience is a Virtue” thing. 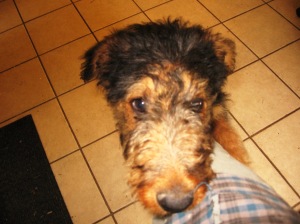 It is going to be a challenge for me to practice “Patience is a Virtue” but it is a challenge I accept. Now if I can just get the eight Standard Poodles, the two Cairn Terriers and the one Italian Greyhound to also accept the challenge. That may well try my patience and destroy my virtue.

It is December 27, 2014. This may be the last time I write that date, for 2015 is standing around the back corner of the garage on the north side just waiting to pounce onto the scene. The temperature is about 40 degrees and the prevailing north wind is whirling about, at 30+ miles per hour, thereby giving us a wind chill of 20+ degrees. The pond lost much of its water in the summer due to the drought however, what remains has white caps. I realize that some live in much colder places, but this is Texas and we do things a bit differently. All seven Standard Poodles are reclining inside their warm kennel buildings. The Silkie Chickens, on the other hand, are wandering about outside their pens, scratching and pecking as if it were 80 degrees. But what do they know? Pea-brained fowl, such as they are. So, that part of 2014 I am anxious to leave behind.

As 2015 approaches, everyone should be thinking about the coming year and what they hope to accomplish. If that means a resolution list, then for those of you who do such a thing, now is the time. Me, I never make a resolution list. Why make such a list only to fail at keeping even the hint of whatever you thought needed to be on such a list in the first place. But I leave that up to you.

However, I did make a to-do list. Or, should I say, the list is made for me. For the novice, or unmarried, a to-do list is not the same as a resolution list. A to-do list is simply a plan of action conceived by a superior authority, while a resolution list is make-believe stuff. Such as, “I probably should resolve to cut back on my sugar”, but I am not putting that on any such list. The doctor does it for me.

This past year, I had so many things on my to-do list that I lost count way back in February. I did remember Valentine’s Day. That bought me a little time. But not to fret, I will eventually catch up.

I have also noticed that if something on the to-do list is not accomplished for that particular year, it doesn’t just disappear, it reappears onto the next year’s list. I do not think that is fair. Just because a certain someone has such an excellent memory does not mean that everyone does. If for some reason, (a really, good reason and not just an excuse) something cannot be completed,  then all should be forgiven, don’t you think. Fair is fair.

I foresee with some certainty, that anything to do with Silkie Chickens will be on that to-do list for 2015. Or, some type of remodel, or any number of ways to keep me current and up-to-date with the latest contraption that we need around our place.  The “rancherette” is very proficient at discovering new things for us “to-do” together.

I look forward to learning what lies in store for me on the new to-do list, as long as it does not contain any reference to my eating habits. I can’t wait, I am so excited.

In the meantime, I may give in and make one resolution for 2015. I may resolve to read the to-do list in its entirety, this year. If I do, then that’s progress. You, on the other hand, should pay attention to whatever list you come across.