Once Upon A Time, the Saga

Once upon a time! That’s how most fairy tales and stories for children begin. One can write a story and start with this idiom and immediately it gains some sort of legitimacy. So with that in mind, I begin another story of Gweeny Goose. I will try to keep this story suitable for children.

Once upon a time, there were three geese, Bailey, a gander, Indie, another gander, and Shya, a goose. (I am told there is no specific name for a female, so I will just call her a ‘goose’. 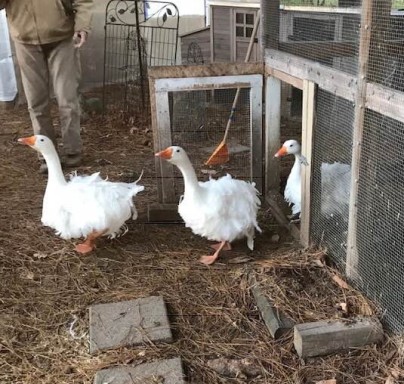 Indie came by his name because he was rather independent. And Shya came by her name because of her shyness. And Bailey? Well, the characteristics were appropriate for a female. As it turned out, she was a he and since the name Bailey is gender neutral, Bailey it was. However, we now had two ganders and one goose. Bailey has evolved, seemly, into the dominate gander, although he is actually the smaller of the two ganders. Like they say dynamite comes in small packages. I think that Indie is just biding his time.

Life was good for the ganders but not so well for the goose. According to the geese experts, a female chooses a monogamous partner about the age of three. Since these three are just now approaching the age of two, it is difficult for the lone goose to manage two suitors.  I can only imagine her difficulty.

On a regular basis, I interact with these three ‘geeses’ (I call them ‘geeses’ which they understand). It requires much study, but I have a Master’s degree in geeses language, and I speak it fluently. Like, ‘att choo doin’ geeses?’ Sometimes, I yell, ‘eir u goin’, geeses? They honk back at me and the louder I get the louder they honk.  Since we put them up at night to protect them from predators, we have taught them a method of cooperation to help us at that task. From goslings we have called out, “let’s go home” as a means of bringing them in. It works quite well, even as they have matured. We sometimes use a small children’s rake to ‘herd’ them into their pens. These three geeses mind very well, most of the time. And most of the time they answer to their names. But a friend of mine reminded me that it is a scientific fact that only when they want too!

And at breeding season, forget all this information. I recall last season. It was so very difficult to go around them. I believe Bailey saw me as a threat. And Indie was not subtle either. Occasionally we would have to use the aforementioned children’s rakes to defend ourselves. The secret to defending yourselves is to not let them get behind you. They are sneaky. Face to face, they seem quite mild. They are friendly and will come close but not too close. Have you ever had a dog nip at your heels? Our geeses have picked up that trait during breeding season. We have a kennel full of dogs and on their afternoon run, they have learned to not go close to the geeses.  Talk about nipping at heels!

So breeding season is fast approaching. Enter Gweeny Goose!  If you read the previous post you know how she came to be the newest addition to the geese population at the Fuzzy Chicken Farm. This story, “Once Upon A Time”, is part of a continuing sage of Gweeny Goose. Perhaps you have once been the new kid on the block or at school. You may recall the reluctance of many to make friends with you or you with them. Such is the case of the “geeses”.

Yesterday was the first day the four were allowed out at the same time. The “Rancherette” and I were very apprehensive about letting them out simultaneously. It was unknown how any of them would react. Would there be any animosity between them?  Would the three original residents cause any rancor? Or would she? Well, there wasn’t necessarily any congeniality between them but there was no bloodshed either. That’s a good sign.So, this morning was the second day of mingling.They appear to be “mingling” just fine. Swimming together and checking each other out. Bailey is either nosy or jealous. He  wants her to be around but then he chases her away when she gets too close to Indie and Shya. 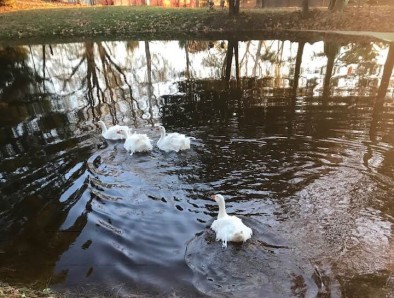 Since they slept in adjacent but separate pens it was a curiosity of Bailey and friends to check out her apartment. It seems that she has spacious sleeping quarters. 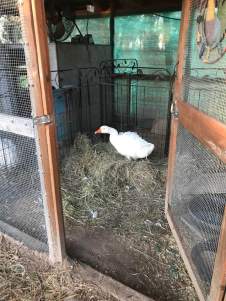 She has good food, too. (It’s the same stuff.) But, it is only a matter of time before she will move in with her choice. [being a female (goose) she is allowed to make her choice.]

But do not be dismayed, breeding season is fast approaching. And I am trembling.

One thought on “Once Upon A Time, the Saga”