Well today is the famous (or infamous) Groundhog Day. This is the day when Punxsutawney Phil, from the city by the same name, burst forth from his lair after hibernating over the winter months. Supposedly, if he sees his shadow, the winter season will last six more weeks.  Of course, if he doesn’t, then winter is over and spring is forthcoming.  I’m here to tell you that the little critter from the north did see his shadow this morning.

Living here in North Texas is not the same as in the utterly cold Northeast or Midwest, but, I do not want to see any more winter. I bet my counterparts in those areas of the country are in agreement with me on this. I have a different method for predicting the forthcoming spring as you will see below.

These days, Punxsutawney Phil is treated like “royalty,” so says, William Deeley, president of the Punxsutawney Groundhog Club  But when Groundhog Day first came to Pennsylvania, that likely wasn’t the case. “It was a social party,” Deeley says. “They basically got together and instead of him being the honoree, he was the entrée.” Yes, that means they “probably ate the groundhog,” Deeley clarified.

I don’t know about you but I do not fancy eating a groundhog (woodchuck), although I believe Alaskans living off the grid fancy these rodents as a delicacy. However, being raised in the piney woods of East Texas, I have been known to eat squirrel. So I guess it is appropriate.

Around our place in North Texas, we do not have groundhogs. I am thankful for that. No shadow-seeking critter for me. However, I do have an abundance of gophers. The critters have little mounds all over my yard.  Since we have nine dogs, seventy-five+ chickens, Sebastopol Geese AND numerous neighborhood free-ranging chickens, I am reluctant to put any chemical on the ground for fear of the animals ingesting the stuff and leading to their demise. So I spread repellant. It is supposed to help in the relocation of these animals. Doesn’t work. And in the rare case where it did help, the moles just seemed to like it even so.

I am wondering if I could convince a gopher to forecast the weather. Naaa…, but maybe one of our Sebastopol Geese? We have three of these beautiful birds. Adorned with their long feathers, they look like a bride in a wedding dress.

They have about a ½ acre to roam complete with a pond and other features to occupy their time. The “Rancherette” gave them names upon their arrival here at the Fuzzy Chicken Farm. “Indie”, for Independence, “Shya” for shyness, and “Bailey”, just because it sounded good. They are smart and know their names. When it is time for them to be put up at night, we simply call out, “Geeses, let’s go home”. They usually go straight into their goose house.

So I’m betting I could train them to predict the weather. Of course, they love cold weather and cold water, so this might be a challenge. Even in the middle of the last cold snap here in North Texas, (15°) they did not falter about going into the pond. However, it was frozen and about all they could do was to ice skate. But the moment the pond defrosted, cold as it was, they were smack dab in the middle, dunking their heads and throwing water over their back.

I’m going to work on weather forecasting by geese. We know for sure that Indie is a Gander (male) and Shia is a Dame, (female) and Bailey, well I am not sure. Sometimes the goose acts like a Gander and sometimes acts like a Dame. 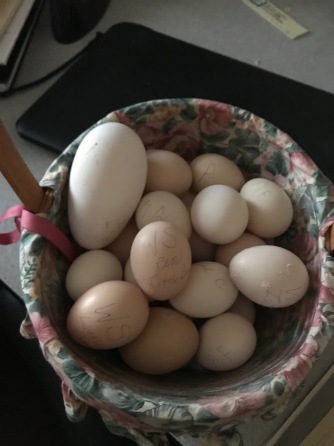 The challenge for you is to determine which egg it is.

Forecasting weather is a complex and serious matter. It takes many years of study and dedication to get it right, most of the time. The longer one prognosticates, the more experienced they become. Take Punxsutawney Phil, for example, his knowledge dates back to 1887.

But geese have been laying eggs and hatching goslings since time began and certainly after the great flood. You remember, two-by-two. It stands to reason that laying eggs is in their genes. this can be used as a prediction for an early spring. We’ll see how this works out.

Interestingly, the young groundhogs are known as “chucklings” which is what I am doing about now. All this begs the question,

None, he saw his shadow and scurried back inside his warm den.

Have a great “early” spring.