DENALI AND THE RAINBOW BRIDGE

Once again, we are faced with a piece of our heart broken. “Denali, Snow on the Summit”, a wonderful male standard poodle, has passed on. He was approaching 8 ½ years. I remember when he came to us as a 3 month old puppy. Although he was never shown, from the beginning he knew how to strut like a champion. He was a brilliant dog, very playful, a bit shy around strangers until he warmed up to you, but he could steal your heart. He had a stuffed duck that we called his baby. When I fed him, I would say, “Nalli”, time to feed your baby. He would pick up the stuffed duck and place it in his food dish. I regret I never got a picture of that. He loved to play ball. We have in our yard a Jolly Ball, typically used by horses, and several of our dogs play with that, but Denali was the best at grabbing the attached rope and swinging it around his head. He would stand there with it in his mouth and dare you to come and get it.

Once, our little black Cairn terrier, Grendel, got out of his kennel while Denali enjoying his run outside. Being the alpha dog that he is, and thinks he is Super Dog, this ten pound canine attacked this fully grown 40 pound Denali. This is where my instinct failed me. I reached in to separate the two dogs. Denali, fully, believing that he was biting Grendel, defended himself and bit me on the hand. The water hose did the trick, however. I have a scar that I will always treasure for it will forever remind me of this beautiful dog.

When Denali was growing up, he never quite mastered the technique of hiking a hind leg to “mark” his territory. Thus he constantly had yellow front legs. He most times “missed “his target.He would be embarrassed if he knew I told on him. But he eventually grasped the gist of the routine procedure. 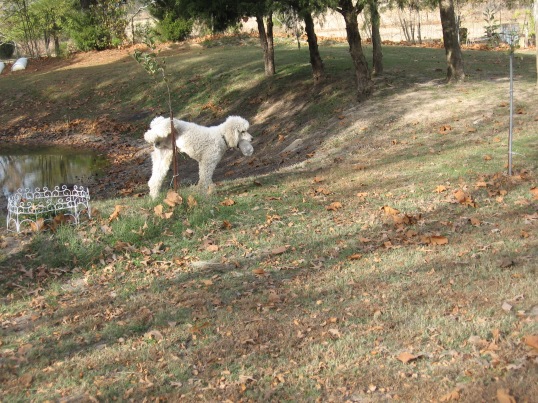 Twice this year we have seen beloved pets cross over the rainbow bridge. And now, Denali joins Munchie and Prada to play forever. I placed his “baby” beside his head. As I said before, I understand it, but I will never get used to it.

Go rest over the rainbow bridge, Denali, my Santa Dog 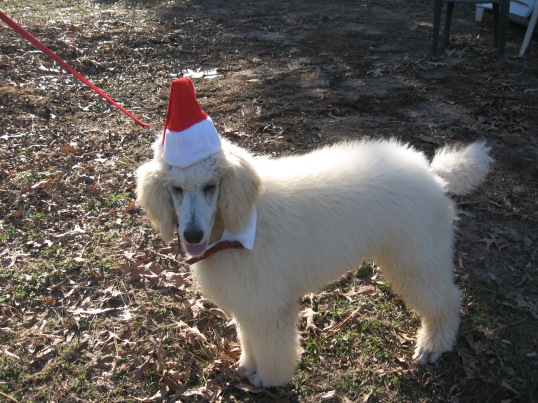 One thought on “DENALI AND THE RAINBOW BRIDGE”