For quite sometime, I have resisted the impulse of entering into the forum of presidential politics. I can resist it no longer. With all due respect to Nancy Guillory, a surrogate for Bailey and Lexie, I borrowed a recent post written by (?) Bailey A. Guillory. Bailey is an Airedale and president of Airedale Home Security. He posted a picture of himself all dressed in his patriotic finery. He pondered the question, “is it too late to throw my paw in for President?” He noted that he had a “good plan for security with zero tolerance towards thievery and violence. He believes in takin’ a bite outa crime.” His platform sounds very encouraging to me. 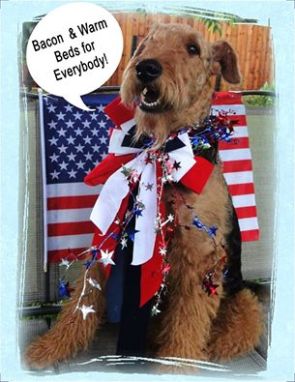 His running mate, Lexie, his baby sister, (Is that legal?) remains confused, but Bailey states that in the dog shows, they at least have credentials and papers. 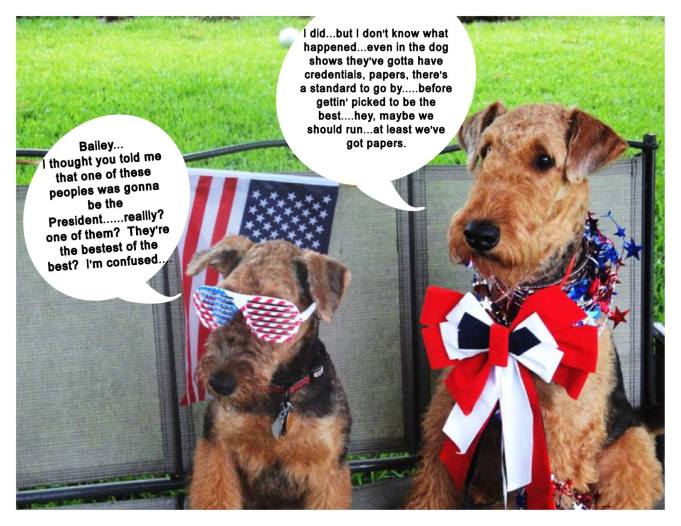 Now this post was made in jest, I think, however, it caused me enough concern to evaluate seriously the general election for president and the current crop of candidates.

I have been of voting age since 1960. I cast my first vote for president in that year. I have never failed to vote since then. My politics have changed over the years, I suppose that comes with age. If you are anywhere near my age, then you have seen good candidates and not so good candidates. Some I liked and some I did not. However, there has always been one for whom I voted. Usually, I made my choice early and stuck with it. That does not seem to be the case this year.

I do not have a perfect record for always voting with the winning candidate. I generally have respected the outcome for it is not about winning or losing, it is about electing the best candidate for our country. I understand that we human beings disagree over who we think is best for our country.

For the most part, even though I may have disagreed with the winner I do not ever recall having to decide between the “lesser of two evils”. I have never seen candidates with such unfavorable ratings as the nominees for 2016. Seriously, are we about to elect a candidate that 60% +/- does not like? No candidate seems to elaborate on platforms or policies, but mostly derogatory statements about the other candidate. Throughout our history, there have been numerous elections tainted by subterfuge, mistrust, chicanery and outright name calling. However, this election seems to surpass all the previous elections.  I remain convinced it is still the best system in the world, however flawed it may be.

As I write this, there are 35 days before election day. Come election day when I vote, I hope I have made my decision by then. As of October 3, 2016, there were 1,896 declared candidates for president, according to the website, Ballotpedia. No mention of Bailey and Lexie. I may need all 35 days to decide.

I must make a choice. Will it be the “lesser of two evils?” Bailey, you and Lexie are looking good.

Strictly my opinion, you may feel free to disagree or not.

Posted in Stories and tagged elections, Home, Life, memory, no chickens, no dogs, no poetry, no road trips, Security

3 thoughts on “Politics and…”