In my previous post, A “Brutal” Winter, it seems I was a bit premature with my assessment of “Brutal”. Being a dutiful Texan, I am always subservient to the whims of tall tales. Not that there was any exaggeration with that post, however, as I said, “That was then, this is now.”

Accordingly, I am providing an update.

The winds blew, the temperature was dropping, all the way down to 33 degrees and the snow began to fall. This happened after I rose from bed this morning.

My first thought, after listening to the list of school and government closings and the urging of officials to stay home, was to call the television station and ask them to add http://www.fuzzychickens.com

and JPR Kennels to their lists of closures.

For my part I was paying attention to the stay-at-home stuff.

Should I call, I would respectfully ask that all Silkie chickens and Standard Poodles at these locations to stay inside today. I am cancelling all their activities and rescheduling their feedings until tomorrow. The hens do not have to lay eggs today. Besides, this is the first time any of our chickens have ever seen the delicate white stuff. They would be quite hesitant to venture out into this stuff, anyway. The hens could lay their eggs in the snow and I would be unable to find them. They have a tendency to drop their eggs wherever they happen to be at that particular time. Silkies are funny that way.

Now the dogs, on the other hand, consider this white stuff to be old hat. But for the caretaker, not so much. So they can just postpone their sniffing wherewithal until tomorrow. Everyone may as well reschedule their morning events. They can all just have the day off. I am not offended that they think otherwise.

After my suggestion about calling the TV station, the “rancherette” decided, for whatever unnerving reason, to build a “snow chicken” in the backyard. The local television station is always asking for viewers to send in their pictures. She said this would be a great picture for TV and she could put her website in the snow as well. What a great marketing tool, she said. And it would be fun, she said. I can put it on Facebook, she said. And it is very cold, I said.

They say that when one reaches a certain age, one has a tendency to revert back to their childhood. I can attest to that.

Being the artist, she is, and with her blank “canvas” before her, like a “phoenix” rising from the snow, a creature comes forth with a funny little beak, a fluffy head and a cedar bough for a tail. It looks just like a chicken. A Silkie chicken!

What with the temperature hovering near freezing, my solution would have been to just set one of the chickens out in the snow and wait a few minutes. Voila, instant “Snow Chicken”.  That did not go over very well. 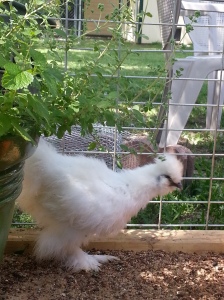 That was this morning, now it is afternoon. The sun is beginning to come out, the temperature is rising and the snow is melting. The ‘snow chicken” is shrinking. The day is just about gone. The dogs and chickens did not pay any attention to the cancellations anyway. I should have known better. It is too late to call the station back and remove my closures from their lists. And I was pretty sure we were in for a blizzard. Just shows you how much I know about Texas weather.

With the temperature the way it is, I have a hankering for a bowl of chicken and dumplings or chicken noodle soup. That would really hit the spot. Chicken sounds good about now.