We have two brand new baby chickens in the brooder and I was concerned about their warmth, so I got up out of sleep to check them out. They were fine however, I couldn’t go back to sleep after that. My mind began to wander, that happens a lot.

Anyway, I spent a good part of the night thinking about what is the world’s most important invention. I do not know which the most important one is, but I have my ideas.

My first idea of that subject is the wheel. You surely have seen the cartoon character riding what appears to be a unicycle. A solid stone carved into a round shape that resembles a unicycle. For a cave dweller, I think he was pretty good at keeping his balance. I have difficulty in walking, let alone, riding a unicycle.

But, if you think about it, the wheel led to many other inventions. Just look around you and see how many things have a round shape like a wheel. Pies, cakes and cookies are but a few. Everybody knows that pie are round, cornbread are square. I don’t believe I have ever seen a square wheel. Flat maybe, but not square.

But, if there were no wheels, we would have to walk everywhere we go. I already mentioned the balance thing .We would not have vehicles, if there were no wheels. If we had no vehicles, there would be no car radios, if no car radios, then no satellite radio, no satellite radio, no Blue Grass station to listen without commercials, and so forth. Stagecoaches had wheels, but no satellite radio. And GPS. If they had, then maybe they would known about the robbers waiting in the hills. And did I mention that radios have round knobs? So, you see, wheels are very important.

I don’t know if this qualifies as an invention or not. But, in the early days of Adam and Eve, they wore no clothes. After that old serpent seduced them into eating from the tree of knowledge of good and evil, they discovered they were naked. They covered themselves with fig leaves. I looked into that and discovered that a Fig leaf does not cover as much as a Catalpa leaf. If it had been me, I would have used a catalpa leaf. In Texas, the Catalpa worms are famous for fishing bait. You look at these images and decide which would cover more. 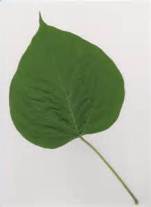 Of course, God did not like that, so He expelled them from the Garden of Eden. I’m thinking they had it made in the shade and they really messed it up. But if clothes had not been invented, or discovered, whatever the case, then you can imagine the sights to which we might be subjected. Plus, here in North Texas, the weather is not conducive to running around in your birthday suit. In the summer, one may sunburn in places where the fig leaf would not cover. So, clothes are very important.

Next, we have the television remote control. This is important to the male species. Usually, the other gender is not remotely, (notice the play on words) concerned about the gadget. For example, with a remote, one can view two or more football games in the same picture. Or, you can switch back and forth between two different TV shows.

Do you remember when the father would tell the kid to get up and adjust the volume or change channels? That worked for other things as well. Like, get me a beer or fix me a sandwich. But those are other stories.

I remember; I was a kid once. Had to go outside and turn the antenna while my dad would yell from the window, “a little more right or that’s enough.”

Anyway, the remote was a very important invention.

As I got into writing this piece, my mind began to wander and think of many more inventions that are worthy of being on my list. I need to keep this short so I will save those for another article. In the meantime, if you have a list of favorite inventions, please let me know. I would love to hear them.

I hope you have a wheely good day.