Well, it is about time. The incubator has been running full cycle for 21 days. And it finally happened. We have been waiting for three weeks for our firstborn. Firstborn Silkie chick, that is! It made its presence known early this morning. We do not know its gender. Thus, we call it an it. And unlike human babies, we won’t know the gender for several months. The “Rancherette” AKA, mother hen, did one of those chicken ultrasounds on the eggs, but it did not disclose its gender. I looked very closely and could not see anything dangling.  But, then, I can’t see anything in human ultrasounds either.

There are “old wives tales” that suggest how to tell the gender but most are only meant to predict a boy or girl after the chick is hatched. I read on http://www.backyardchickens.com of a method that says, “If you pick a chick up with two fingers by the neck, the pullets will draw their legs up to their body and the cockerels legs will dangle.”  I don’t know about you, but I’m not going to hold up anything by its neck or anything else that dangles before my eyes.

As I write this, it is nestling among the eggs that have not yet seen fit to join the birthing club. The newest chick in our flock is starting to exhibit its authority by cheeping loudly, rolling the eggs around, and in general, explaining the process to those still enclosed in their shell. This is how the pecking order begins.

When the one with the strongest pecker makes its debut, it begins to order all the other chicks around. This will continue throughout life. Authority goes to their head. I suppose in this hatch of eleven, if they all hatch, another authority figure will stand up and demand homage from the passive underlings be they cockerel or hen. Then the battles will begin. Of course, some old biddy hen may revolt and argue the circumstances.

Anyway, I hear it cheeping and am trying to translate. It is very difficult, however I think it is trying to say:

Come out of there, I am hungry and the mother hen (that  would be the “Rancherette”) will not take me out to feed me  until I have company. So get out of there.   Use your little pecker. It will break the shell.”

So we are waiting and pacing, pacing and waiting. The incubator is in a spare bedroom for now, That makes it convenient to do that. The “rancherette” goes back and forth from room to room; she cannot stay away from the incubator, sort of like watching a pot of water waiting to boil. She sits and watches, just waiting for another mouth to feed. It’s not as if we have so few mouths to feed if you count our ten canines. Sitting and watching, that’s the “rancherette”.

The “rancherette” may be the mother hen of sorts, but it isn’t like a mother-to-be, it is more like a grandmother-to-be. You have all the thrill of delivery and none of the pain. It is all pleasure.

Around the world, there are people waiting to hear about the newest additions to our flock. We appreciate your enthusiasm and best wishes. I am sorry we did not have any baby showers; however, we are registered at Neiman Marcus if you are interested. Not to worry, though, we will let you know ASAP. In the meantime, here is the first baby picture. 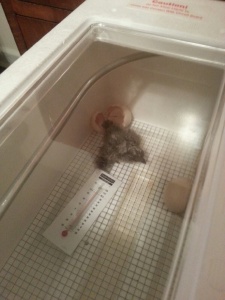 I know, it looks dead, but it isn’t, it is our firstborn.

One thought on “It’s Time”