No Guarantees in Life Except… 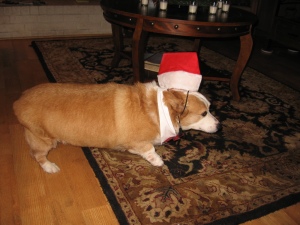 Yesterday was not an upbeat day. B.J., our old Welsh Corgi, reached the end of his life. Approaching thirteen human years, that translates to ninety-one dog years; his old body was just worn out and could not take it anymore.

We had struggled with having him euthanized for several weeks. It was a painful decision. When you enjoy pets, especially dogs, as we do, it is hard to let go. They are, in fact, a member of the family. B.J. was a member of this family all his life.

But it was also painful watching him attempt to get around. The lower part of his body was fast deteriorating. To get him outside was a major feat.  His little legs were at a point of not cooperating with his brain. When his brain said move, the signal did not reach them.

His front legs would move and drag his rear end across the floor. But on a laminate floor, he mostly just slipped. We sometimes placed a dining room chair behind him and gently pushed. This avoided his grouchy side and a response we might not enjoy.

We bought several rubber-backed rugs and placed them around the room in order to give him a bit of traction as he tried to move. He tried desperately, and though grouchy at times, he never seemed to complain, at least not so we could understand. Although certain words we say would trigger a response, barking or whining.

Apollo was B.J.’s roommate. Apollo is a Standard Poodle, and sometime mischievous. We have a habit of playfully calling him “despicable”. B.J. took offense at that and barked every time we repeated it. He seemed to be saying, don’t be calling my friend, despicable.

Both enjoyed a bowl of ice every afternoon. During the day, they resided in what we call the “spa room”. In the afternoon, when we allowed them into the main house, Apollo would rush to the refrigerator and wait impatiently for the sound of the icemaker dispensing ice. B.J. would come struggling along. When B.J. arrived, Apollo sort of moved out of the way. Kind of like he recognized the pecking order for ice.

Yet, they both delighted in emptying the bowl and not allowing the other to get any ice. B.J. would protect the bowl. When Apollo saw an opportunity, he would get several pieces in his mouth and run to the rug where he would dispense the ice in a pile and run back for more to keep B.J. away from the bowl.  But there B.J. would be, guarding the bowl.

B.J. was overweight to say the least. We discovered earlier on, that he was not only eating his own food but was also devouring Apollo’s. When we found out, we bought a raised stand for Apollo. But B.J. figured out that he could reach the food and continued until we placed obstacles in front of the food. Apollo could then reach over the obstacles, yet B.J. could not.

We often wondered if B.J. was part snake. Lounging around in the living room watching television, we would look over and B.J. would be licking the air as a snake does with his tongue. It was eerie.

He was quite a nester. Somehow, he would maneuver his backside under the table legs or in a corner in such a fashion that removing him became a major effort. He usually reclined in front of a doorway, never moving out of the way and with his rear end facing the room. I suppose he was giving us his best side.

There are many such stories I could relate about dear old B.J. The best I can say is that he was a devoted companion in the family. If you have pets, use their time on this earth with a mutual enjoyment. They deserve it.

Will B.J. go to heaven? I do not know. I hope so. He certainly brought about a lot of joy on this earth. It seems only fair to me that he bring that joy to the hereafter. But as I said, there are no guarantees.

In the human realm, most believe in a heaven where with the right frame of mind, one can reach those golden shores. I believe that with my personal knowledge and understanding of  Jesus Christ, I can achieve that destination. I hope you believe that as well.

3 thoughts on “No Guarantees in Life Except…”